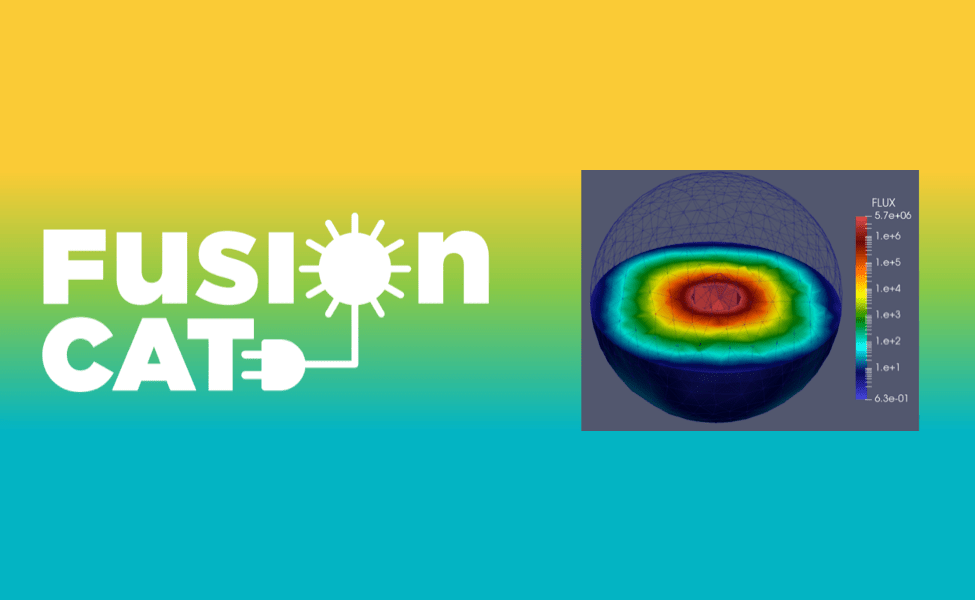 The Barcelona Supercomputing Centre – Centro Nacional de Supercomputación (BSC, https://www.bsc.es) coordinates FusionCAT, an initiative that brings together seven Catalan institutions to collaborate in the field of research and development of fusion energy technology. The BSC also participates in the three technical projects of the initiative: Project 1 “Towards the complete integrated modelling of a fusion reactor”, Project 2 “Neutronics, Tritium production and operational fuel cycle” and Project 3 “Study of the fusion reactor”. The present article focuses on neutronics modelling in the framework of Project 2.

Future energy production fusion reactors such as DEMO are based on the massive production of plasma neutrons. This includes their impact and effects on breeding blankets to multiply neutron output and sustain the fuel cycle. To achieve efficient energy production, the fuel cycle must be understood and optimized, which is why the second project within FusionCAT is oriented towards the analysis of the interaction between neutrons and reactor components. In this project, the first task involves the development of a high-fidelity deterministic neutron transport solver called NEUTRO.

The model is based on the Boltzmann stationary transport equation which considers the energy of the particle, its solid angle (direction of travel) and position, the flux (dependent on the position, the solid angle and the energy), the total macroscopic cross-sections for capture and elastic scattering. The spatial domain is discretized using the Finite Element Method. This decision allowed NEUTRO to be developed within Alya, a Finite Element multiphysics parallel framework created at BSC (https://www.bsc.es/research-development/research-areas/engineering-simulations/alya-high-performance-computational). Alya is designed to solve different physical phenomena in a coupled way in large scale supercomputers, accomplishing high parallelism standards and scalability with physics models coded and compiled independently in separate modules.

The multigroup approximation is used to discretize the energy spectrum. It is divided into a given number of bins, with each of them considered to have an averaged energy and a constant cross-section within the range covered by the group. The phase space must also be discretized to have a finite number of directions in which the particles can travel. This is achieved with the Discrete Ordinates or Sn Method, defining a set of directions, each with a relative weight over an angular part that may be represented as points on the unit sphere. Lastly, material anisotropy of the scattering medium is considered using real-based expressions for spherical harmonics. The model currently can consider boundary conditions of vacuum (neutrons escape the material), reflective surface (neutrons are reflected specularly to the closest available direction) and source (an isotropic neutron source is applied at the boundary). The domain can be formed by multiple materials composed of several constituents each.

The necessary input data for each NEUTRO simulation (for example, the capture and elastic scattering cross-sections) are built from publicly available Evaluated Nuclear Data Files (ENDF) using the open-source software NJOY (http://www.njoy21.io/). The latest validations of NEUTRO were performed by selecting some cases from SINBAD (Shielding Integral Benchmark Archive Database), an OECD/NEA Data Bank (Organization for Economic Cooperation and Development, Nuclear Energy Agency Data Bank) and ORNL/RSICC (Oak Ridge National Laboratory, Radiation Safety Information Computational Centre) joint project. Its main goal was to establish a database containing sets of radiation shielding and dosimetry data relative to experiments relevant to reactor shielding, fusion blanket neutronics and accelerator shielding. The chosen tests used hollow spheres in diverse sizes and different materials, with a Deuterium-Tritium (DT) neutron source at the center, studying the neutron leakage spectrum on the outer surface of the sphere. Simulations were performed in 2D slabs as well as 3D layers and spheres for iron, nickel, aluminium, tungsten, manganese and silicon, among others. The results of leakage spectra calculated with NEUTRO are in good agreement with the experimental results, even though some deviations exist. Some of the results have been published in the journal Fusion Engineering and Design in 2021 (https://doi.org/10.1016/j.fusengdes.2021.112497).

Currently, work is being done to adjust and improve NEUTRO to carry out further validations of the variation of the neutron flux through the thickness of the domains as well as including the possibility of calculating the heat and tritium production caused by the neutrons interacting with the materials in the first wall of a reactor and the breeding blankets. These validations include comparing our results to those obtained by other codes, such as the Monte Carlo code MCNP. Moreover, despite NEUTRO being a part of Alya, additional work is required to couple it to other Alya modules such as the thermohydraulics one.

The FusionCAT project with file number 001-P-001722 has been 50% co-financed with €1.960.963,66 by the European Union Regional Development Fund within the framework of the ERDF Operational Program of Catalonia 2014-2020 with the support of Generalitat of Catalonia.