The Heat and Mass Transfer Technological Center (CTTC) is a research center of the Universitat Politècnica de Catalunya (UPC) devoted to mathematical formulation, numerical resolution and experimental validation of heat and mass transfer phenomena applied to thermal and fluid dynamic optimization of thermal systems and equipment. In this sense, CTTC is participating in the RIS3CAT FUSIONCAT activities within Project 2 about Neutronics, tritium breeding and operational fuel cycle for the high fidelity High Performance Computing (HFD) Computational Fluids Dynamics (CFD) simulations of liquid metal flows and within Project 3 within Fusion reactor studies for the dynamic modelling of supercritical CO2 power cycles for fusion nuclear power plants.

Nuclear fusion reactors have the potential to provide huge amounts of CO2-free energy using fuels (deuterium and tritium) which are widely available and nearly inexhaustible. To do so, tritium must be produced during the fusion reaction. This is done in the so-called breading blankets (BB) where tritium (and helium) result from the interaction of lithium and the neutrons generated in the fusion process. In Europe, a helium-cooled lead–lithium BB is considered as a design option for applications in fusion power reactors such as the ITER project.

Accurately predicting the interaction of the magnetic field on the conductive fluids inside the reactor is of great importance in the design process. High opposing Lorentz forces as a result of induced currents need to be precisely calculated to do so. In the present project, a step beyond the state-of-the-art methods is taken to improve accuracy and stability in a newly developed numerical code. This code has been used to predict magnetohydrodynamic (MHD) flows in the turbulent regime, showing the expected behavior of turbulence suppression due to the Lorentz force in the presence of a magnetic field. Inclusion of Large Eddy Simulation (LES) models into the code will allow for the simulation of MHD flows in regimes of higher Reynolds and Hartmann numbers (Ha), which is sought after in the design of nuclear fusion reactors (see Figure 1). 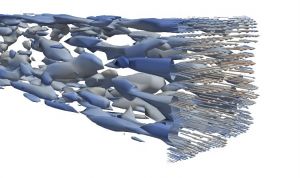 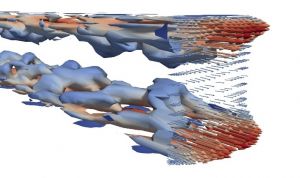 Figure 1: Direct Numerical Simulation of a turbulent conductive fluid flow through a duct at Re=3000 (Reynolds bulk), without (left: Ha=0) and with (right: Ha=30) magnetic field using a symmetry-preserving discretization. Visualization of the flow structures using the Q-criterion with coloring corresponding to the velocity magnitude and arrows to the velocity field at the outflow. The plot shows the effect of flow suppression in the center of the duct and increase in the side wall jets, leading to(wards) quasi 2D turbulence phenomena.

Figure 2: Supercomputers where the new algebra-based code is being tested. Ranking corresponds to the list of June 2022 (for details visit www.top500.org)

Apart from this, we keep on working on the efficient portability of the code on the variety of computing architectures (CPU, GPUs, ARM, MIC…) competing in the exascale HPC race. To do so, the computing operations that form the algorithm, so-called kernels, must be compatible with distributed- and shared-memory MIMD parallelism and, more importantly, with stream processing, which is a more restrictive parallel paradigm. Consequently, the fewer the kernels of an application, the easier it is to provide portability. At this moment, the performance and scalability of the code is being tested on a variety of supercomputers (see Figure 2) with completely different architectures in the context of two on-going PRACE projects.

The FusionCAT project with file number 001-P-001722 has been 50% co-financed with €1.960.963,66 by the European Union Regional Development Fund within the framework of the ERDF Operational Program of Catalonia 2014-2020 with the support of Generalitat of Catalonia.