These tasks are closely linked to the research activity ANT has had on Fusion Technology over the past decade, mainly related to the Breeding Blanket components and ancillary systems. Breeding Blankets perform three functions in a fusion reactor: shielding the magnets, recovering the heat produced in the plasma, and producing tritium, which is one of the fuels of fusion.

In order to be sustainable, Fusion Energy must achieve self-sufficiency in tritium. This hydrogen isotope will be produced in the breeding blankets (BB) from the reaction of neutrons leaking the plasma with lithium. In some of the designs of BB proposed, tritium will be produced in lithium-lead, a liquid metal used as coolant as well as breeder material.

Liquid metal, being electrically conductive, will present Magneto-Hydro-Dynamic effects under the magnetic field used to keep the plasma in place. For instance, pressure loses in the flow due to MHD effects are high, and increase with the velocity of the fluid and the magnetic field. The velocity profiles in MHD flows are quite different than in other types of flows, leading to different heat transfer and tritium permeation values. ANT has implemented MHD models in OpenFOAM, an open source Computational Fluid-Dynamics (CFD) toolbox, in order to model and understand the behaviour of lithium lead in the BB. Tritium transport modelling features have been added to OpenFOAM as well.

In this regard it is worthwhile to notice that helium is produced at the same rate (mol-to-mol) than tritium in the neutron-lithium reaction. Helium solubility is thought to be extremely low in lithium-lead. Helium bubbles are postulated to appear in the liquid metal within the BB, as a consequence of helium production rates, relatively low pressures, and high residence time. Interaction of helium bubbles with the externally applied magnetic field must be studied and important effects on tritium transport are expected. ANT will analyse all of these issues and will try to quantify such effects. 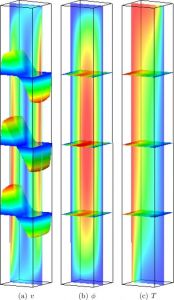 The analysis of tritium migration within the several fluids and through the structural materials is of special interest. Environmental emissions of tritium must be kept very low because of Radiation Protection requirements; this, in turn, obliges to keep a low tritium inventory in the plant (in order to minimize migration outwards), and to maintain a precise inventory control.

ANT has developed migration models of tritium and other hydrogenated species, both for CFD tools like OpenFOAM and for ad-hoc one-dimensional codes. These tools help understand the relative importance of the various tritium migration paths in the systems of a fusion plant and, in a first stage, will be used to simulate the experimental facilities of the Institut Químic de Sarrià (IQS).

ANT is working towards the development of a dynamic inventory control strategy which relies on sensors like the ones being developed at the IQS, and validated predictive modelling tools. The ultimate goal is to be able to track the tritium concentration in the plant by means of overlapping system-wide predictions with localized measurements.

A Fusion Nuclear Plant aims at producing electricity. Supercritical CO2 power conversion cycles present several advantages as compared to other alternatives: mainly compactness and the higher efficiency in the operating temperature ranges of the primary coolant of fusion reactors.

In a future scenario with a large penetration of renewables in the electricity grid, flexible operation of nuclear power plants will be a must. The design and operation of these plants will require robust and flexible dynamic analysis tools.

ANT is exploring the capabilities of existing thermal-hydraulic system codes, like RELAP5-3D, and other more flexible tools (like the Modelica toolbox) to model the hydraulic systems of a fusion plant, aiming at the design of a suitable control strategy. The final goal is to have tools that will allow to maximize the electric output of the fusion nuclear plant while assuring that operation parameters like pressures and temperatures are kept within technical specification limits. Nevertheless, to achieve this goal it will be necessary to understand the behaviour of heat exchangers and turbomachines operating with a fluid close to its critical point. 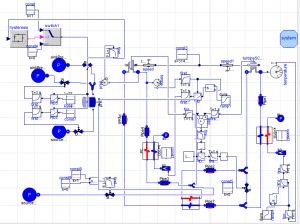