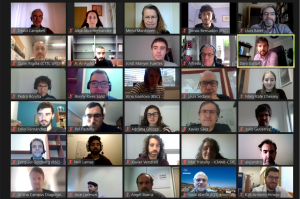 Today, November 23rd, our group participated in the 2021 FusionCAT Annual Meeting, which counted with the attendance of 41 researchers from different backgrounds, institutions and expertise. The main development areas of the project were explained and the current status of the ongoing research was presented. Comments, questions and constructive criticism were exchanged during the discussions, helping reach the overall conclusion that the FusionCAT project is progressing well and according to schedule. Each of the groups in the consortium achieved the technical objectives that were agreed upon, while at the same time participated in creating an active nuclear fusion community in Catalonia.

FusionCAT is a collaborative EU-funded project that aims to boost the emerging sector of nuclear fusion in Catalonia, by combining the knowledge, resources and efforts of diverse institutions. It is a consortium formed by Foundation b_TEC Campus Diagonal-Besòs (BTEC), Technology Centre of Catalonia (EURECAT), Institute of Materials Science of Barcelona (ICMAB-CSIC), Chemical Institute of Sarrià (IQS), Catalonia Institute for Energy Research (IREC), Universitat Politècnica de Catalunya (UPC) and Barcelona Supercomputing Center (BSC), as the project coordinator and organizer of the FusionCAT Annual Meeting 2021.

The meeting was held online via Zoom, and it started with a welcome by ICREA researcher, FusionCAT Coordinator and leader of the Fusion Group at BSC, Prof. Mervi Mantsinen. This was followed by a short round of presentations of the participants, an overview of the current status of the project by BSC Research Project Manager Ms Alba Abia, with news on the extension of the project untill the end of 2022, and a presentation of the status of technology transfer activities by Dr. Joan Farnós (BSC), who highlighted the importance of outreach to attract the industry sector. Thereafter, the meeting was divided into three consecutive sessions corresponding to the main FusionCAT research projects (P1, P2 and P3). Each of them, in turn, was divided into several talks corresponding to their different tasks.

The first project session, P1, was chaired by Mr Jordi Manyer (BSC). Each speaker had 10 minutes for a presentation, followed by 5 minutes for questions. Dr Pedro Bonilla (BSC) began the presentations with a talk on the Development of fusion multiphysics HPC simulation capabilities, during which he pointed out a new ongoing collaboration with the Karlsruhe Institute of Technology (KIT). He was followed by Dr Dani Gallart (BSC) on the experimental evaluation and validation of fusion simulation codes, and Prof. Lluís Batet (ANT) expanded on the same topic. Dr Gallart noted the improvements on the diffusion coefficient operator within the PION code, better reproducing the experimental results, while Prof. Batet talked about creating data using OpenFOAM to train a neural network. Finally, Mr Tomás Bensadón (BSC) talked about PION integration with the European Transport Solver (ETS) inside the ITER Integrated Modelling and Analysis Suite (IMAS). He showed results from two simulations carried out with a JET discharge and an ITER synthetic shot. 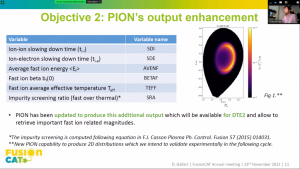 Dr. Dani Gallart exposing the BSC results on Task 1.2 during the past year.

Dr Alejandro Soba (CONICET) chaired the session on P2. The first talk, on the development of high fidelity deterministic neutron transport modelling, was given by Dr Ezequiel Goldberg (BSC), who explained the progress that has been made with the Alya neutronics module NEUTRO. The following speaker, Dr Jordi Abellà (IQS), talked about the development of tritium and lithium sensors and fabrication of PbLi alloy. Thereafter, Dr Xavier Trias (UPC CTTC) and Mr Ronny Rives (UPC-ANT) discussed high-fidelity CFD simulation of liquid metal flows. They discussed the scaling of their models on 3 different supercomputers, Marenostrum (BSC) being one of them. Dr Xavier Vendrell (UPC-NEMEN) gave a presentation on the catalytic membrane reactors for hydrogen isotope recovery and fuel clean-up systems. 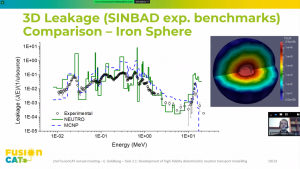 Finally, another 40 minutes were allocated for participants to take part in a general discussion. Prof. Batet pointed out that for the next project call we should start thinking about DEMO, not only ITER, and Dr Campbell said that some effort needs to be made to attract companies into the DEMO project, as it is not so attractive being a long term project. In the end, the PIs concluded that the project has evolved nicely from last year and encouraged the members to continue in this direction.