[Tech] Contribution of the Electrochemistry Laboratory of IQS to FusionCAT project: Hydrogen sensors

[Tech] Contribution of the Electrochemistry Laboratory of IQS to FusionCAT project: Hydrogen sensors

The Electrochemistry Laboratory is part of the Department of Analytical and Applied Chemistry of IQS. One of its main activities is the development of hydrogen and lithium sensors for high temperature applications.

In the framework of the FusionCAT project, the first goal of IQS participation is the development of prototypes of electrochemical hydrogen sensors able to operate in chemical aggressive environments, such as fusion reactors. These probes are the first step towards the development of future tritium sensors. 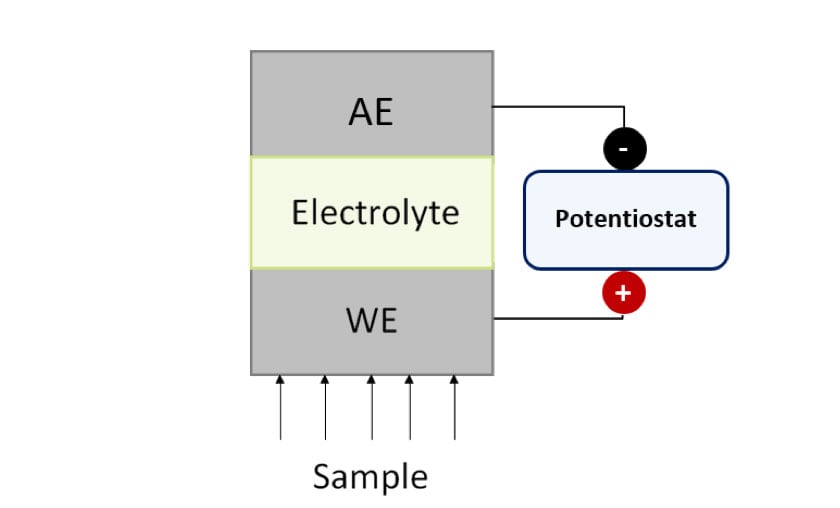 Amperometric sensors are composed of at least two electrodes: the Working (WE) and the Auxiliary (AE) electrodes, which are in contact through a common electrolyte and connected to a potentiostat. At the beginning, the potentiostat applies a potential difference. Then, the analyte interacts with the working electrode and, finally, the associated electrochemical current that flows between the WE and the AE is measured by the potentiostat. In this way, the analyte concentration is determined.

In previous projects, we selected BaCe0.6Zr0.3Y0.1O3-α and Sr(Ce0.9Zr0.1)0.95Yb0.05O3-α as proton conduction ceramics for sensor’s construction. These ceramics are perovskites and they show good proton conductivity typically between 400 and 1000°C.

Sensors for lab-experiments are constructed binding one pellet of these ceramics to an alumina tube. Both sides of the pellet are metallized using platinum ink. This way, the outer part of the sensor acts as a working electrode (anode) and the inner side as an auxiliary electrode (cathode). Figure 2 shows a schematic representation of these sensors and Figure 3 shows the experimental set-up. 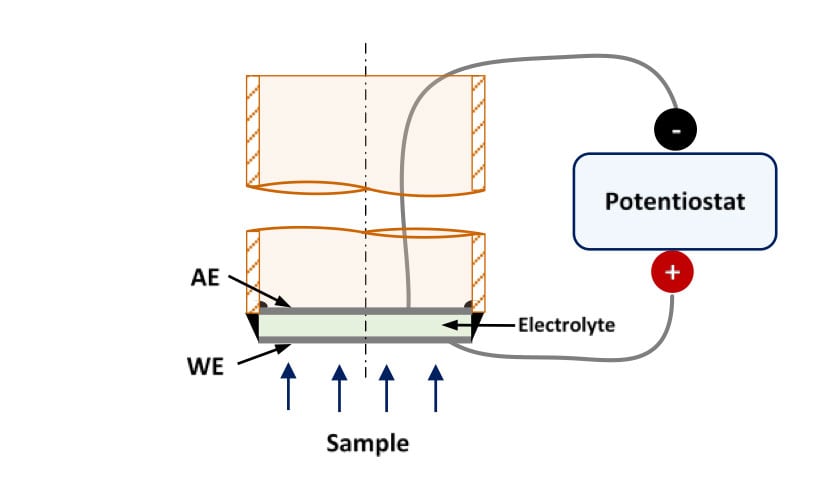 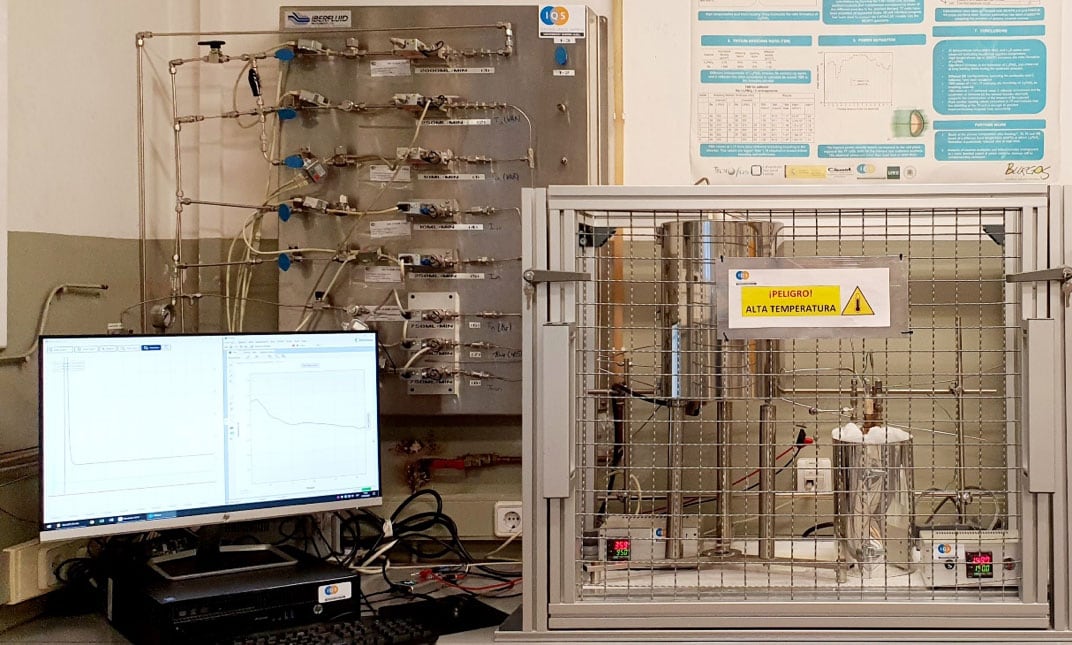 When a potential difference is applied between both electrodes, hydrogen, which reaches the working electrode, is oxidized to generate protons that are transported along the electrolyte to the AE, where they are reduced to produce hydrogen. Thus, the electrochemical current associated to the reactions is function of the hydrogen concentration in the working electrode. The hydrogen concentration can be obtained using a calibration curve, obtained previously.

The electrochemical current depends on the active area of the electrodes. The higher the area, the higher the current and the sensitivity will be. Other geometries, such as one-end closed tube, have larger surface areas than the pellets used for lab-experiments, so the electrochemical response of the probe can be improved changing its geometry. Figure 4 shows a representation of a prototype sensor using one-end closed tube electrolyte. 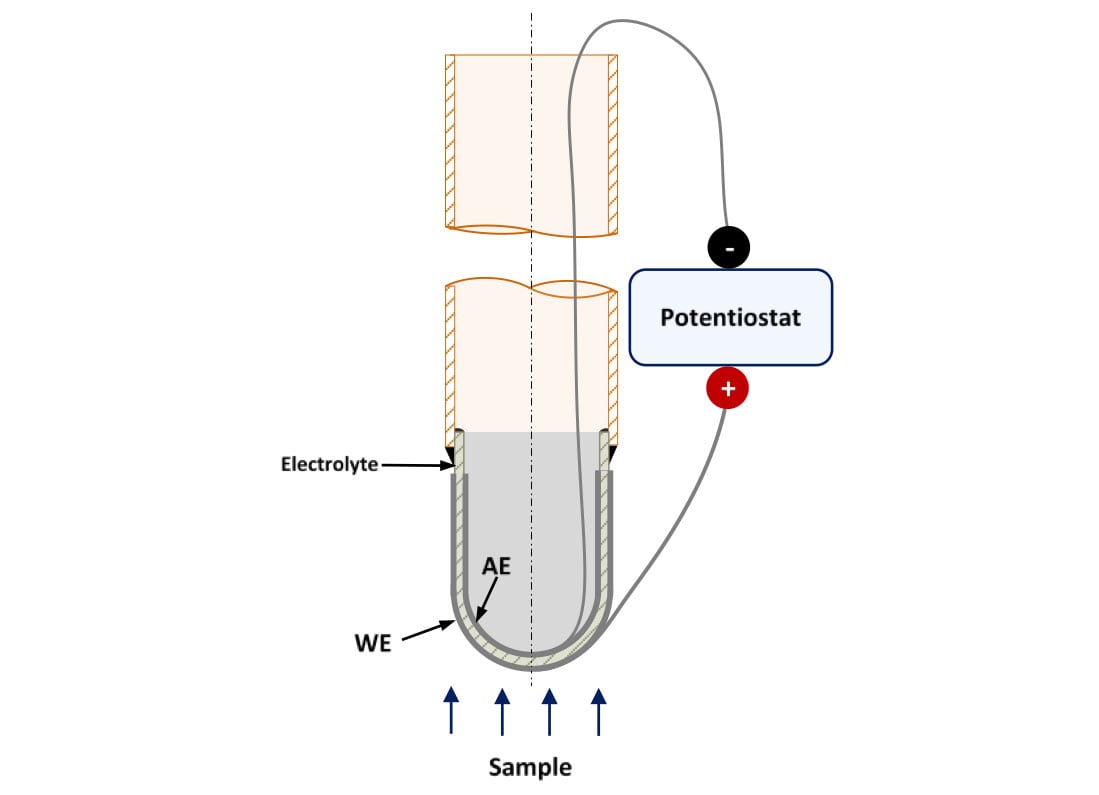